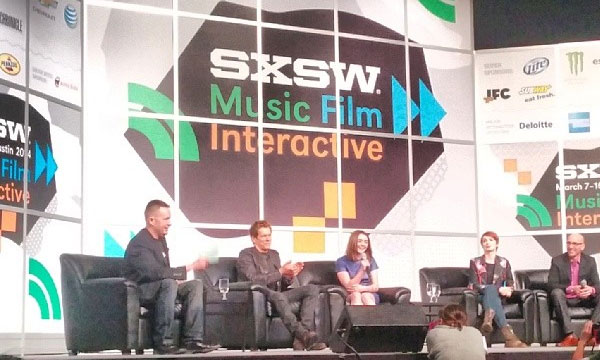 After our first night of SXSW parties, the team were clutching on to water bottles throughout day 2. But the fun didn’t stop, with a day packed with celebrities.
First up was Julian Assange, Skyped in from the Ecuador Embassy back in the UK where he has been staying for since June 2012. This session was a real divider of opinion, with attendees calling him either a hero or a villain.

In the interview, Assange discussed the copious amounts of data there is around us, and that this data is closely monitored and logged by not just governments, but private companies such as Google.
Data security is certainly a very hot topic. We’ve seen use of services such as Duck Duck Go (an anonymous search engine) increase following the NSA revelations, and increased use in private social networks such as WhatsApp and Snapchat. Perhaps privacy may be the next driving force behind the next big social platform.
The next session tackled even bigger issues, on a much grander scale. It was a discussion of The Universe, with science legend Neil deGrasse Tyson.
As you’d expect with a session on the Universe, it was awe-inspiring. Tyson has a natural gift for storytelling, which can often be difficult when explaining the science behind things, yet alone the Universe. The learning from his event was to be curious. To not believe; but to question.
For example, when a child bangs on pots and pans, Tyson explains we should let them be; this is an experiment in acoustics. When a child drops a glass, it is an experiment in materials. The costs of both activities is an investments in their curiosity and education. Ignorance costs much more.
As if we hadn’t seen enough celebrities already, we managed to pack in a few more, with a session on the Six Degrees of Kevin Bacon, with Kevin Bacon, Felicia Day and Maisie Williams.
The session may have been littered with bacon puns, but it also discussed the real social phenomenon of the Six Degrees, and how this has managed to last for 20 years, unlike memes we see today, which may continue, but are often drowned out by the next one that comes along.
We must also point out, that everyone attending from the Ultra Health Tech team now has a Bacon number of 1, after appearing in this Vine with the man himself (you just need to look very, very hard).